A Brief Trip to Hell and Back–All without leaving my kitchen! 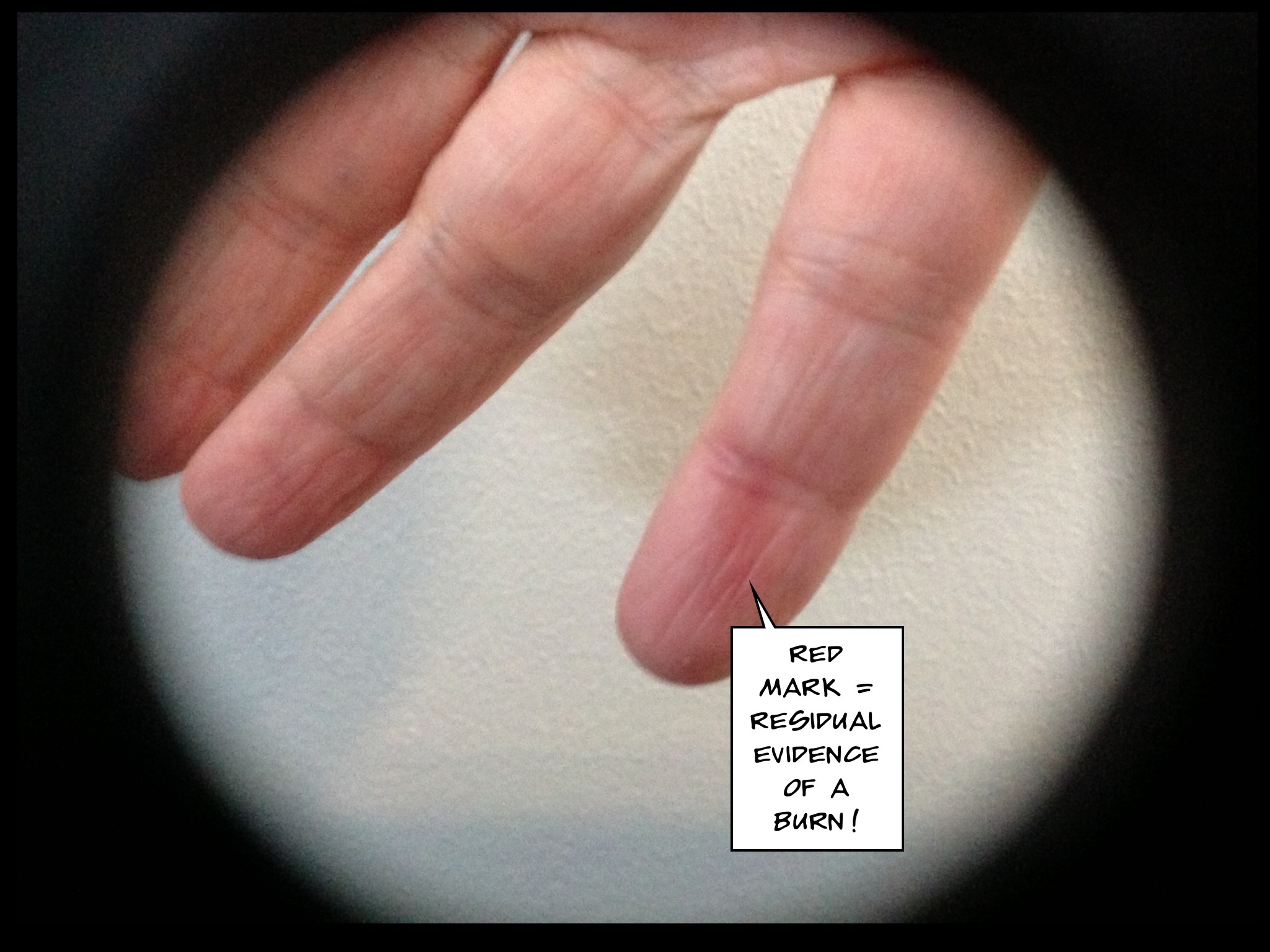 A small red mark is all that remains after a painful burn.

The title may be a bit over dramatic, but my recent accident in the kitchen hurt like the devil.

Saturday I was frying some home made breaded onions.   My son and I are both on Gluten Free diets.  I have been thinking a lot about the old fashioned green bean casserole, but it is NOT  Gluten Free, as you may know.

Early last week I discovered that there are some Gluten Free Condensed Soups available and the Gluten Free Store in my town carries them.  I had made a trip and picked up a couple cartons of the Cream of Mushroom variety.  I could have made it from scratch, but I just wanted to try out the soup.  I can’t use the French Fried onions you get in the store, so I was making my own.

Somehow, my finger got dipped into the hot coconut oil in which I was frying the onions.  It hurt like the devil!  I started out running my finger under warm water.  After all, cold water for a burn is NOT homeopathic.  I gradually got to cold water.  That little trick of starting with warm water actually worked!

Quickly my mind went to all the possible remedies.  Causticum, Calendula ointment, Cantharis are the ones most easily accessible.  I considered a dose of Causticum, thinking that this may be too bad a burn for that remedy.  I have used it frequently when I have burned myself on a curling iron or by touching the oven rack, or burned my tongue on hot pizza.  But this burn felt worse than any I had had previously.  Not being able to think too clearly on my own, I grabbed my homeopathy first aid book.  I came up with Cantharis.  In reading it, it seems like maybe I should have used it in other circumstances as well.  But the two key symptoms I had were that it burned without being touched and it is for scalds which are better from ice and cold applications.  I noticed that as long as I had my finger on a bag of ice, it was not painful at all.  But mere moments after removing it, the pain was excruciating.

I took a dose of Cantharis.  Nothing.  Being certain I had the right remedy, I took a second dose 15 minutes later.  Within 10 minutes I felt some relief.  But it only lasted for about 10 minutes.  By then I was at my son’s basketball game–not where I wanted to be with that much pain.  I took another dose.  BINGO!  That did the trick.  I continued to feel less and less pain.  However, I could see a couple of small blisters begin to form.  I thought about the way homeopathy works, sometimes pushing you through the various stages of an injury or illness more quickly than normal.

I went to bed, thinking I may wake up in pain and need another dose.  I kept the remedy on my bedside table.  No need for it.  I woke up feeling barely any pain. The blisters that were beginning to form were gone. I did manage to not have to wash any dishes yesterday because the hot water hurt my finger.

Today, the redness you see in the picture is all that remains of any evidence of a burn.

The lesson:  don’t stop after one dose.  There was probably plenty going on under the surface, so to speak.  My experience with Causticum is that it worked so quickly.  But this was a more serious burn.  It needed more time.

Homeopathy works great when there are first aid injuries that require care.  But don’t give up too quickly!