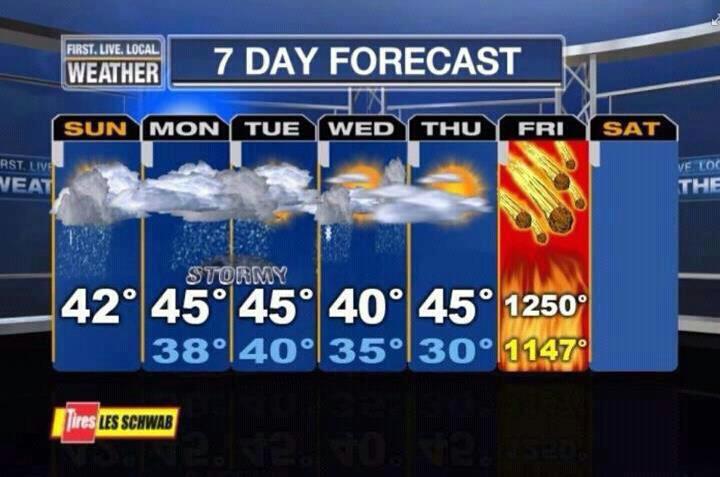 The Weather Forecast for 12/21/12. Not sure who created this, but thanks for the good bit of humor!

This may be the last blog I post.  That is, if the Mayans are correct, or our interpretation of their calendar is correct.

Homeopathy will certainly not stop the world from ending if it is indeed destined to do so.  But there are some remedies that do reflect a fear that the world is coming to an end in some way.  So I thought it would be fun and interesting to share some information about them, in light of the impending doom.

The first place to look in the homeopathic repertory is under a symptom called, Mind, Prophesying, Predicts the time of death.  The first remedy one thinks of in this situation is Aconite.  This remedy is a fairly common one and you can pick it up at your local Vitamin Shoppe or food coop or natural foods store.  The idea behind Aconite is not that you are going to die sometime soon.  The idea is that you are going to die in the next couple of seconds.  It is a useful remedy for children who are very fearful about medical procedures, for example.  Also, it helps those who have been in a car accident who can’t seem to shake the fear that the next car in the intersection is going to blast through the red light and kill them.  (I’m sure you all know what I am talking about.)  Aconite was given out a lot by homeopaths in New York after 9/11, and I’m sure those in Connecticut will also be recommending Aconite as well, after the recent tragedy there.

With not quite the same sense of urgency, but nearly so, we find Argentum Nitricum.  You may know this substance as Silver Nitrate.  Do you ever look over the edge of something high and get the willies?  If you feel that way because you are afraid you might jump, this is the general feeling of Argentum Nitricum.  They are a bit impulsive and they get that sensation in high places.  If they are in between large buildings, they are concerned the buildings may fall.  Bridges?  They might collapse.  It is also a good remedy for people with performance anxiety.

Cenchris contortrix is also known as the Copperhead Snake.  The feel they will die immediately as well.  Often it has to do with a violent death in this case, whereas Aconite is more about an illness or an accident.  The fear often comes on the night and the person who needs it wakes up screaming with her heart pounding.

Lac Defloratum is a remedy made from skimmed milk.  Skimmed milk is actually not good for you, but as a homeopathic remedy, it is amazing and with the right mental emotional picture, can help people get over their sensitivity to milk.  Like all milk remedies, the people who need it are care takers.  The women are very domesticated and for them, there is no other choice.  Sometimes it gets to the point where they are feeling hopeless about their situation.  She will suffocate and die alone in a convent.  (Words from the 1800’s.)  Modern day information would be a mother who is really torn between staying home with her children and feeling like she simply can’t do that anymore.  Or they get headaches so badly they wish they could die.  There is no fear of death. It is a more drawn out process, a bit of a living death.

There is also a symptom Mind, Death, Conviction of.  The people who need the remedies in this symptom are sure they will die, without assigning a time to their death.  So those who are fearful of the demise predicted by the Mayans would definitely not fall into this category.  As it turns out, there is almost no overlap with the remedies in the other symptoms.

I hope the Mayans are wrong and you are around to read my next blog post.  Have yourself a Merry Little Christmas!