The AAA’s of Fear of Flying 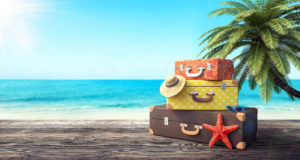 Spring Break is upon us.  The airport parking lots are getting fuller each day (92% full earlier this week).

Some of those people who are going on vacation would prefer to somehow arrive there through some portal rather than having to fly to get there.  Why?  Because they are afraid of flying.

Symptoms abound with fear of flying.  Heart palpitations, sweaty palms, perspiration all over, certainty that you are going to die.  The list could go on.

What is a traveler to do?

You could take beta blockers, but the side effects are almost not worth it:  fatigue, dizziness, weakness, dry mouth, etc.

Homeopathy has a lot to offer in battling the fear of flying.  There are several acute remedies that can be taken, but ultimately if none of those remedies work, constitutional homeopathy may be required.

Just a note:  This article is about fear of flying, not motion sickness in the airplane.  Please read the blog post about Seasickness to get some ideas of possible remedies for motion sickness.

Remedies to Try for Fear of Flying. 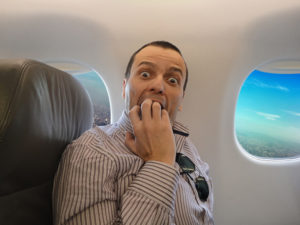 If you are certain that you are going to die when you fly, Aconite is the remedy for you. There are a few symptoms in homeopathy that express this: Mind, Death, can predict the time of.   Mind, Death, presentiment of.  Mind, Death, conviction of.  There will likely be some heart palpitations associated with the experience of flying.  There is also a likelihood of vomiting in people who need this remedy while flying.  Aconite can be either warm or chilly.

Feeling claustrophobic along with great anxiety are the fear of flying symptoms that indicate Argentum Nitricum as a possible option to provide relief for fear of flying. There is an out of control feeling that is associated with Argentum Nitricum.  Learning how airplanes work and what all those strange noises make would probably be helpful for someone who needs Arg Nit when flying.  You will probably also feel flushes of heat during periods of anxiety.  Argentum Nitricum prefers staying at home, so it is to be expected that traveling would cause some problems for these people.

With Arsenicum, the fear is that you could die.  This is different than Aconite, which is certain they are going to die.  Arsenicum fears can cause nausea and vomiting and a good deal of anticipatory anxiety prior to the day of the flight.  The person needing Arsenicum to help their fear of flying will be chilly, even if they normally are not.  Arsenicum also has the symptom of generally being aggravated from travel, and given the anxious nature of the remedy, this is not a surprise that people who have a fear of flying may need Arsenicum

Although this remedy is not an A remedy, it is a useful remedy for flying.  Calc Carb people have a good deal of anxiety related to their personal safety and their homes, so it makes sense that flying would bring up the fear even more. Like Arsenicum, Calc Carb people have anticipatory anxiety and may be thinking about the flight for days. The person needing Calc Carb will definitely be sweaty during the flight, palms, underarms, really, pretty much anywhere could be sweating.  And they may be concerned about what others will think of their sweatiness and anxiety.  Because Calc Carb is sweaty, they will also likely be chilly because any heat they may have experienced will be released through the sweat.

Take a dose as soon as you being to notice symptoms.  If you have anticipatory anxiety, feeling fearful days ahead of the trip, take a dose then.

The day of the trip, take a dose as you depart for the airport.  If you are waiting, your anxiety may return, so if it does, repeat the remedy.  On the plane, if the symptoms return, repeat as needed.

There are other Fear of Flying remedies, but give these a try first.  They are the most commonly used ones. If they don’t work, contact us at Lotus Homeopathy for more ideas.  651-748-1556.

Have a safe trip and a fun vacation!