Can we all agree that this is the strangest Spring on record?  CoVid-19 has changed everyone’s habits, including the amount of time we spend outdoors.

We have been encouraged to spend time outdoors, for our mental and physical health, during this time of “shelter at home.” But for some people, spending time outdoors in the spring makes them miserable. Allergies from tree and grass pollen can create a variety of symptoms, some worse than others.

Homeopathy can help relieve symptoms of Allergies, and it can help assure they don’t come back.  In fact, allergies are one of the prime reasons people seek homeopathic care.  It also happens to be the case that allergies are the most researched and most proven ailment that homeopathy has been found to treat effectively. Read more about that by downloading a document here. Personally, I have gotten over seasonal allergies and cat allergies using homeopathy over the years.

In homeopathy, we can manage the symptoms of allergies during the worst season for you by simply matching a remedy to the symptoms you are currently experiencing.  However, once the worst is over, it is best to seek constitutional care for your allergies.  This is true for a couple of reasons.  On the practical side, even if we are able to find a matching remedy, you likely would need a different remedy the next year.  This is so because of how homeopathy works–that is, the wrong remedy only works for a while.  The right remedy works much longer.

The second reason for seeking care for your chronic condition is that it is the only way to get to the underlying reason for having the allergies in the first place.  It provides a more permanent solution.

What about antihistimines and other western medicine allergy solutions?

You probably have already given up on these if you are reading this blog post.  While they may work temporarily, using them on a continual basis will suppress your allergy symptoms and they may instead appear as something worse.

Historically, homeopathy has a strong relationship with allergies.  A homeopathic physician from Scotland, Dr. Blackley first identified pollen as the cause of hayfever back in 1871.  Dr. Grant Selfridge, a homeopathic physician from San Francisco was one of the founders of The American Academy of Allergy.  And of course, the concept of allergy shots was borrowed from homeopathy, where small doses of the offending agent are introduced in hopes of creating an immunity of sorts to the allergen. It doesn’t always work, and some people end up worse.

In the meantime, here are some homeopathic remedies that may help you with your seasonal allergies.  Many of these are available in stores, but not all of them are.  I do try to emphasize those that are easiest to access, but if your body is signaling symptoms that belong to a remedy that is not typically available at your local healthy food or supplement store, you still need to know what that remedy is.

(Allium Cepa is a homeopathic remedy made from Red Onions.  You can think about the symptoms of onions, eyes watering, nose running, some sneezing, some burning.) 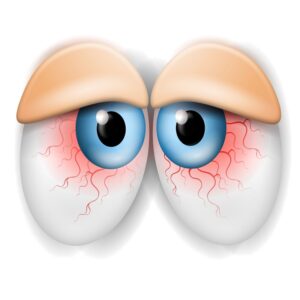 (This remedy is commonly called Eyebright. With a name like that, you can imagine that the worse symptoms are going to be located in the eyes.)

Gelsemium is one of the top remedies for influenza, well known for its weakness, emotionally and physically.  So it is no surprise that this symptom also shows up in seasonal allergies. 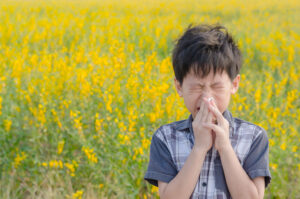 This remedy is homeopathic Sodium Chloride, which is often used to help with colds, allergies, and a variety of other dis-ease situations.

Pulsatilla is well known as a children’s remedy, but can also be used for adults with allergy symptoms, where the symptoms match.

If frequent sneezing is your worst symptom, start with Sabadilla.

Allergies/Hay Fever which affects the eyes.

What if None of These Match Your Symptoms?

If none of the remedies above match your symptoms and you are still suffering, schedule a complicated acute consult and we can work together to find you some relief with homeopathy.

Need Some More Help This Spring?

Keep an eye out for more help with symptoms with homeopathy by reading other blog posts, including using homeopathy for TIck Bites.  Help deal with bulls eye rashes and embedded ticks.