The physical dis-ease of PTSD and CPTSD can be healed with Homeopathy!

Are mornings painful for you?

Is running, walking, or simply moving around helpful?

Do you have multiple pain points throughout your body that are difficult to manage?

Would you like to NOT have those symptoms, and recover from PTSD at the same time?

If you answered yes to any of the above questions, you are in luck!  Homeopathy can help those symptoms, all with one remedy.  Choosing homeopathy means you do not have to take multiple drugs at one time.

What Are All These Pain Symptoms?

These, along with a whole list of other symptoms, are part of the syndrome known as Fibromyalgia.  And it is really commonly seen with PTSD and CPTSD.  In fact, it is so common, that some people probably receive their Fibromyalgia diagnosis before they get the PTSD diagnosis.

Fibromyalgia, formerly called Fibrositis, isn’t really a “disease”.  It is a conglomeration of symptoms that when added together, doctors call Fibromyalgia. In Homeopathy, we call it dis-ease.

Studies done in England in 1986 showed that patients who used homeopathy reported a significant degree of reduction in pain and tender points and improved sleep over those who took the placebo.  Researchers found the significance to be p<.005, which means that there was a 5 in 10,000 chance that the improvement could be attributed to chance. 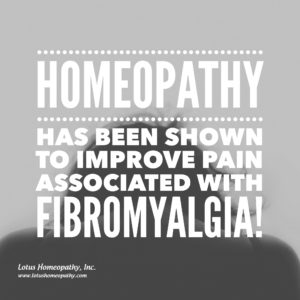 In a more recent study (2004) conducted at the University of Arizona and published in the journal Rheumatology, homeopathy was also shown to significantly improve symptoms of Fibromyalgia.  The study found that 50% of the participants found a 25% or greater improvement of symptoms over a four month period than those on Placebo, which was only 15% improvement.  The significance of this study showed an 8 in 10,000 chance of the improvement being attributed to chance.

Patients who were given the homeopathic remedy rather than the placebo also rated the “helpfulness of the treatment” significantly greater than those given placebo.

What Does This Mean in Real Life?

Many years ago, I had a client who sought homeopathic care for her Fibromyalgia.  She had all the usual symptoms: pain better from heat, worse in the morning, better from motion.  She was also on Anti-depressants. This was all caused from a botched medical procedure. Interestingly, her fibromyalgia pain was identical to the pain she used to get once a month from her menstrual cycle, except now, she had the pain all the time instead of a couple days per month.

The fibromyalgia improved pretty quickly, eventually disappearing, as did her asthma. What this meant is that she didn’t have to use a daily inhaler, and only rarely a rescue inhaler which usually occurred when she was around cats for any length of time.  Eventually, her cat allergies improved as well.  The quality of her life improved dramatically due to homeopathy.

Given the amount of time that has passed from the studies reported above until today, you can imagine that many people have healed their Fibromyalgia and accompanying mental/emotional “dis-ease” using homeopathy.

If Fibromyalgia is a symptom you have alongside of your PTSD or CPTSD and you would like to lose the pain, schedule an First Appointment today, to get started on healing tomorrow! If you have some questions first, schedule a Complimentary Consult.

And, as always, please share this blog with anyone whom you think it would help!