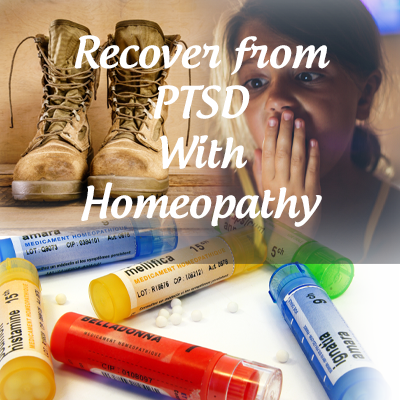 Are you struggling with symptoms of PTSD?

So did the people whose testimonials appear below.

If you would like to begin recovering from PTSD, read and watch the testimonials and then sign up for a complementary consult to ask questions and see if homeopathy will work for you.  If you are ready to begin healing, sign up for a New Client appointment today, and begin healing this week!

(PS, you do not have to be an adult, or have been in the military to suffer from PTSD.) 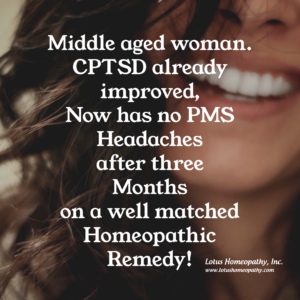 I joined Kathryn’s PTSD study because I just couldn’t take my misery any longer. I had been in therapy for a year to deal with my C-PTSD from childhood trauma and while I had improved a little, it wasn’t helping enough. I also had an exposure to lead in the last 5 years that started my spiral downwards physically. Nothing I had tried, conventional or alternative worked. My anxiety and depression was so bad, that I barely slept and was spending more and more of my time at home, not wanting to go out. I had horrible stress headaches, indigestion, high blood pressure, and I had just lost hope of ever improving.

Once I began the study, my symptoms improved greatly. I was sleeping better with much less anxiety. The headaches were better and less frequent. I also began getting more out of my therapy sessions. Once COVID hit I went back into a bout of anxiety and sleeplessness. After meeting with Kathryn again, she switched me to a different remedy and now my symptoms are once again improving and lessening. I feel so much better and I have hope of a bright future ahead.

I am so thankful for Kathryn and how she has helped me with homeopathy.

Before homeopathic treatment, LG answered yes to 14 of 17 questions on a PTSD questionnaire.  After treatment, 10 of the 14 symptoms were improved and 4 remained the same, but were less impactful symptoms.  This symptoms in this questionnaire were based on a symptoms from the DSM V and and a questionnaire from the Anxiety and Depression Association of America. 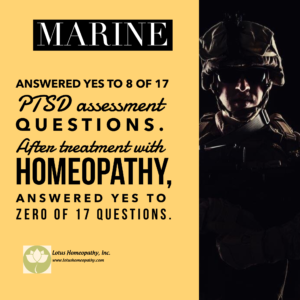 I have a diagnosis of PTSD, anxiety, and frequently depression. I have done years of counseling, EMDR, and group therapy. My wife encouraged me to try homeopathy to see if it would offer a benefit in addition to other treatments I have done.

I am glad that I gave homeopathy a try.

The difference I noticed this past year during the homeopathy trial is that seasonal depression never really took hold during the winter. This is the first winter that I can remember that I did not get fully depressed, and go down a spiral facilitated by the gloomy weather and the deep hole it always puts me in. I mentally and emotionally stayed the same this winter, as any other season, which was new and I attribute this change to the homeopathic treatment. Thank you Kathryn!

James answered YES to 8 of 17 questions on a PTSD Assessment Questionnaire.  After treatment, he answered NO to all the questions.

Watch this video to learn how life changed for this participant in our PTSD & Homeopathy Study.  She was a first responder for nearly two decades.

Below is a video testimonial from a man who participated in our PTSD and Homeopathy Study after suffering from PTSD for nearly 7 years after witnessing a co-worker’s death on the job.

Dayne, ND
I have C-PTSD due to childhood trauma and military service. When I got out of the army in 2008, I started to notice a lot of problems. I sought professional help and that was when I was given the initial diagnosis. I had okay results with therapy and tried prescription medications, but I started having more problems with the prescriptions. I was sleeping for long periods of time and was very forgetful, unfocused and had a serious lack of motivation. After a few years, I stopped the prescriptions and I saw some improvement, but the problems were still present. We started trying natural remedies and after using homeopathy in other areas with success, I decided to try it for my PTSD.
After seeing Kathryn and doing the study, everything improved. I noticed an increase in clarity and significant increase in ambition. Tasks that I had put off for years were being completed and I was more focused. My night terrors went from being a weekly occurrence to only a couple times a month. Overall, it has been life changing and I’m very thankful for having homeopathy in my life.
MM, Northern Michigan

I signed up to be in Kathryn’s PTSD study at a time when I was experiencing yet another failed attempt at recovering from CPTSD.  I lived with symptoms since my early teens.  I am 60 now and I tried many things to heal, including energy psychology, which provided only temporary relief. Talk therapy always lead me to re-telling the trauma and finding more trauma and in turn, leading me to feel more like a victim with no way out and no hope to heal.

After working with Kathryn for several months, I began to notice changes.

I continue to see changes and as a matter of fact, I don’t consider myself someone with CPTSD anymore.  I have stuff that comes up and I get triggered, but now I can see it for what it is and figure out what I need to do to get through, overcome, or learn from the situation.

Kathryn, thank you for helping me to get my life back.  It was great to have you on my team!!

More About Homeopathy and PTSD

You can read more about Homeopathy and PTSD on our Blog.  Here are a few examples.

Yes, You Can Recover From PTSD and CPTSD

When Does a Shock Turn Into PTSD?

PTSD Can Make You Itch!  Who Knew?

There are many other blog posts on PTSD under the Our Blog tab.  Do a search for PTSD and all the options will appear on the screen.  Then, when you are done reading about PTSD and how Homeopathy Can Help, schedule an appointment and start feeling better next week.