When Does A Shock Turn Into PTSD?

This Blog Post was edited to include new information on 2/11/22. 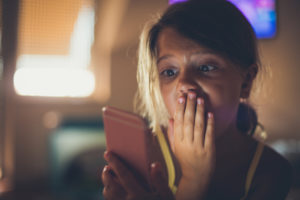 For many people, PTSD begins with an incident that resulted in feeling shocked.  Generally, there is an unexpected occurrence—perhaps a major incident such as the Oklahoma City Bombing, or 9/11 terrorist attacks, or the sudden death of a family member or friend, a natural disaster, or it could even be a near death car accident.  Often the initial response is to feel shock or fear or a combination of both.

The best thing to do in these circumstances, where there is a shock to the system, is to see a homeopath right away.  Some symptoms may just pass on their own eventually, but if they don’t, and you can continue to wait until they do, the symptoms may become entrenched and you could develop PTSD. 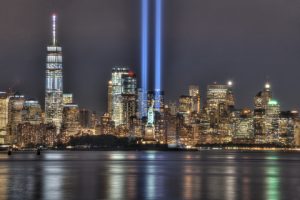 A colleague in NYC shared a story about treating a client from the after-effects of the collapse of the World Trade Center Towers.  This client came to see him at least a year after the incident.  Homeopaths most commonly gave the remedy Aconite to their patients who sought care immediately. This is a remedy for fear that your life is going to end NOW!  (See this blog post.)

But this client didn’t need Aconite.  He needed a different remedy called Stramonium. The fear became more specific over time, and it matched the fears of Stramonium, which are more personal than the fears of Aconite, with the danger being directed specifically at the person who needs the remedy.

After taking the Stramonium remedy for a time, the client began experiencing more general fears of dying.  It was as if a fear and anxiety layer was built up over time, and it became a Stramonium layer.  Once Stramomium removed that layer, the homeopath could see the Aconite picture. The Homeopath prescribed that remedy. Over time, the client recovered from his PTSD.  It turns out that the client actually did seek homeopathic care earlier, was prescribed Aconite, but DID NOT take the remedy!!!  When he returned, he needed a different, deeper remedy.

I remember 9/11 very well.  I was far removed from it, but I still needed a remedy to deal with the faces of evil people I kept seeing in my sleep.  My homeopath recommended Phosphorus for me.  It isn’t likely I would have ever developed PTSD from it, as I was a half a country away from the epicenter of the attack.  But I still needed to take a remedy to enable me to sleep.

Your proximity to the incident and how much it directly affected you certainly impact the likelihood of developing PTSD.  But there are no hard and fast rules on this.  Just to be sure, I’d call the homeopath at Lotus Homeopathy. 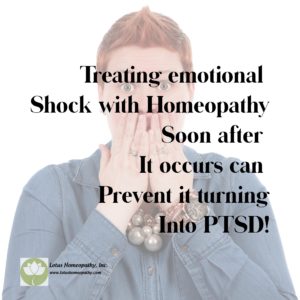 There are also a number of remedies that homeopaths consider when someone’s initial response to an incident is one of shock.  This is very common with an unexpected death, with Ignatia being the number one remedy recommended for this type of situation. Certainly it could also be the response to abuse, especially if it comes from someone who has never been that way towards you in the past.

I recall a client who, three years after the fact, was still shocked by the abusive response he got from his family to a letter he wrote.  (His didn’t turn into PTSD–it wasn’t the sort of thing that likely would.).  He got a remedy for shock because, well, he was still shocked!

Being directly affected by an incident and not treating it homeopathically can cause the symptoms to become entrenched in the body, causing mental, emotional, and eventually, physical dis-ease.

Studies On Preventing PTSD With Medicine

Cochrane, widely seen as being objective about what they post in terms of research, recently posted a summary of medicines being studied as a way to prevent PTSD.

One thing they pointed out is that most people do NOT develop PTSD when exposed to traumatic events.  So it could be difficult to conduct an accurate study on such medicines.

“The medicines most commonly given to participants in the studies included: hydrocortisone (which reduces the body’s immune response), propranolol (used to treat heart problems and anxiety, amongst other conditions), and gabapentin (a medicine primarily used to treat seizures and nerve pain).”

The summary of research, which was published on February 10, 2022, reported that no conclusions of any benefits to using the medications could be made.  For a variety of reasons, poorly designed studies, really low confidence levels in the results, etc.  Here is the link for the article, which was viewed 2/11/22.

If you would like to Prevent or Recover from PTSD, schedule a Complementary Consult and we can discuss whether homeopathy will work for you!