Change Your Dreams, End Your Nightmares with Homeopathy 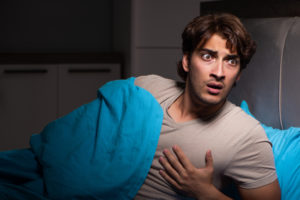 Dreams have a particular role in helping someone heal from PTSD or CPTSD.  Nightmares can be a common expression of the root cause of PTSD. But can you heal your PTSD nightmares naturally?

According to Psychology Today, dreams are a way to work through “difficult, complicated, unsettling thoughts, emotions, and experiences, to achieve psychological and emotional balance.”

Given that definition, anyone who has seen a homeopath gets asked about their dreams.  No matter what your reason is for seeking care from a homeopath, your dreams can be used to help determine a remedy to heal what ails you.

PTSD Nightmares Can Disappear with Homeopathy

“Norm” was stationed in Afghanistan.  He was in a situation where, at any moment, he could have been killed by ballistic trajectories being lobbed into the compound.  Day after day, month after month, with some near miss explosions–this was his way of life.

When he returned home, he couldn’t sleep.  He had nightmares from which his wife would have to wake him.  He had night sweats.  The nightmares of nearly dying occured several times per week.

During the day, he was irritable towards his family and the people at work. (He felt this was largely due to not getting enough sleep.  Makes sense.) The perspiration continued through out the day.  His job was physical labor, but he still felt that he was sweaty more than he wasn’t.

He hated going out into crowds.  He was always checking on his family, making sure they weren’t in danger; always looking for a way out of danger.  As a result, he and his wife never went out with friends.

Norm received a homeopathic remedy that matched his symptoms of delusions he is about to die, irritability, dislike of and fear in crowds.

Homeopathy For The Win! 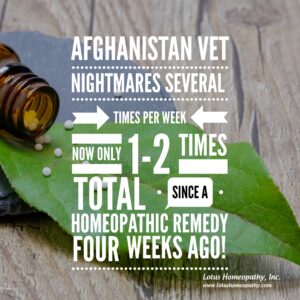 Four weeks later, after a homeopathic remedy, he reported this:

To sum up his results, Norm said, “I think it is better than [what] the VA gives me.  I don’t take that anymore.”  (He wasn’t taking it before the remedy either because it made his symptoms worse.)

Homeopathy Has Changed CPTSD Dreams Too

One client used to have dreams about showing up in public naked. She reported a healing dream at her last follow up appointment.  What happens in healing dreams is they end differently, and in a positive way, generally.

This time in the dream, she managed to catch herself before going out naked and put some clothes on before she left.  The other part of the dream was that she ended up at a medical appointment, and the receptionist was sitting there in her bra, like it was no big deal.  Healing dreams are very powerful for those who experience them and are a positive sign that things are moving in the right direction.

Homeopathy Can Help With Others Dream Life Too!

I want to share my experience of dreams changing by using a homeopathic remedy.  Maybe you will see yourself in this story.

Many years ago, I had a job that had some good points to it, but my boss was not so good.  In fact, one day 13 people quit at the same time.  One of my colleagues said that it felt like when she quit that she had left an abusive relationship.  So you get the idea and perhaps know exactly how she felt.  It was a difficult situation to be working in.

I tried to hide from him in my dreams.  You can imagine how hard this was to do in an elevator. Sometimes there would be a janitor in the elevator with me and I would try to hide behind his cart.  Most of the time, I couldn’t hide.

One day, my homeopath gave me a new remedy and it was a remedy for hiding.  I took that remedy and the next night I had a dream.  The dream was that I pushed the elevator buttons, the door opened and there was my boss.  Instead of trying to hide, I had a conversation with him.  And it was a good conversation.

After I had that dream, my perception of what that job was like really changed a lot.  It didn’t seem so bad after all.

You could have that experience too with the nightmares that you are having as part of your PTSD.  You might not have a healing dream, such as mine.  Not everyone has one.  Your dreams may just go away.  But you could heal your PTSD nightmares naturally with a well chosen homeopathic remedy.

How To Get Started Eliminating Your Nightmares

If you are ready to heal your PTSD nightmares naturally, schedule an Initial Consult.

If you need to ask more questions, schedule a Complimentary Consult.

I look forward to hearing from you.