PTSD & TV and Movies: What Remedies Do They Need? Part 2

Spoiler Alert!  If you haven’t watched all the episodes of Outlander, you probably want to skip this blog post until you are through with Season 5, or at least through episode 8.

Even before the outbreak of CoVid, my husband and I got hooked on watching Outlander in early 2020.  I know that the books on which the series is based are well researched and represent what it was like living in that time period.

The way women were treated would be unacceptable today, for example.  Life was not safe back then.  Lots of drama and trauma on the show. 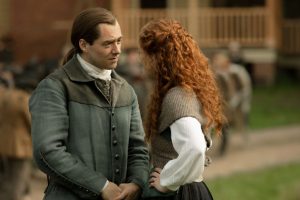 In the Middle of Season 5, in the Episodes entitled “The Ballad of Roger Mac” and “Famous Last Words,” Brianna’s husband Roger was mistaken for the enemy and was hung. He would have died were it not for Jamie rescuing him. In the process, his vocal cords were damaged, which meant not only was it difficult to speak, but also to sing.  Roger was known for his lovely singing voice.

However, it wasn’t just that his vocal cords were damaged that he couldn’t speak. He was terrorized. Who wouldn’t be?

Finding a Remedy For Roger

The time period featured in Season 5 of Outlander is Colonial America, in 1771. Samuel Hahnemann was certainly alive and living in Germany at the time, but he was still in his teens and hadn’t discovered the principles of homeopathic healing yet. Because of the time period, Roger had no chance of being healed with a remedy.  But we can try to find one for him anyway.

First, lets look for a few symptoms. We don’t need many symptoms because his inability to speak due to the trauma, both physical and emotional, is going to reduce the number of possible remedies.  It isn’t a common occurrence, so there aren’t many remedies in that symptom in the Homeopathic Repertory.

In the repertory there are 144 Fear of Death rubrics, also called symptoms. There are numerous modalities, time periods, and accompanying mental states that go along with those symptoms. The most common symptom is “Fear of Death” which has 285 remedies listed in it. When you have a rubric with that many remedies listed, it is helpful to look for a more specific rubric.

I chose the rubric, “Mind, Fear of death, of impending death.” You might look at that and think, wait a second. Impending death?  Isn’t this a past near death experience? Yes it is. But we have to look at it from Roger’s point of view.  In his mind, every time he has a flashback, it is impending death.  It feels like the hanging is occurring over and over again.

Rubric for Inability To Speak

Next, lets find a rubric to cover his inability to speak as a result of his trauma. This is a little trickier.  There are several contenders, but only one really describes his situation.

There is a symptom, “Mind, Talk, Inability to, although she tries.” This seems like a possibility, and there are definitely some remedies in there that suggest this is a result of fear, but in this case, Roger isn’t even trying to speak.

Another symptom to consider is, “Mind, Taciturn, indisposed to talk, fright, fear aggravates.” This seems like a good symptom, but there are only two remedies in it, so we need to find more, but we can include this one.

Finally, there is a symptom, “Speech & Voice, wanting, lost; fright, fear aggravate.” That’s the one.  It has 9 remedies in it, so between the two symptoms that describe Roger’s condition, we should be able to find a good remedy.

And The Remedy Is….

I chose the remedy Aconite.  The repertorization appears below.

Other options would have included Op, and Cuprum.  I would have expected Roger to be sleeping a lot and basically be in his own world had he needed Op.  Cuprum is very controlling and that just didn’t show up in his character, if he was that way.

Aconite is all about near death, and feeling that same feeling over and over again.  Sometimes it is an incident such as a traffic accident or even nearly getting in an accident. If Roger were my client, I would give him a 1M or 10M and repeat as needed.  He would likely need many doses over time.  Love alone won’t help Roger heal in real life, as it did in Outlander.  Homeopathy would help him recover much more quickly.

If you suffer from PTSD, whether it is like Roger’s case or your own unique version of it, please schedule a Complementary Consult and we can chat to see if homeopathy would work for you.